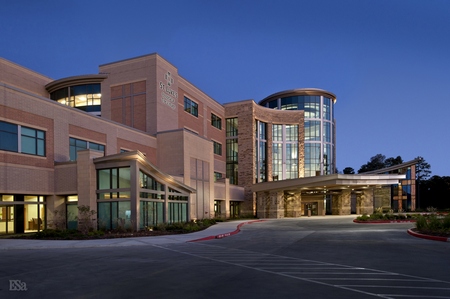 Hammes Company selected as development partner for the 106-bed, 224,414 square foot facility in northwest Houston, its fifth major project for the system in the past 11 years

HOUSTON  — Northwest Houston residents now have easier access to quality medical care thanks to the recent opening of St. Luke’s Hospital at The Vintage. The 106-bed, four-story, 224,414 square foot facility is the fifth major collaboration since 2000 for St. Luke’s Episcopal Health System and Hammes Company. The Brookfield, Wis.-based healthcare consulting firm has served as St. Luke’s development partner for three hospitals and two medical office buildings (MOBs) during the past 11 years, and another MOB is currently in production, marking the sixth project with St. Luke’s.

The new hospital, which opened in December, is located at 20171 Chasewood Park Dr. in northwest Houston. It is situated in The Vintage, a 630-acre master-planned, mixed-use community at Louetta Road and Texas State Highway 249, near Cypress.

Construction of St. Luke’s Hospital at The Vintage began in July 2009 and was completed by the development team in about 15 months. In addition to being developed on an extremely fast-track schedule, the hospital was expanded beyond its original scope without an increase in budget. The initial budget reflected a 90-bed facility, but the development team was able to deliver a 106-bed facility without boosting the cost, due in part to Hammes Company’s project management efforts and lower-than-estimated construction costs.

“Our team of medical professionals is delighted to have the opportunity to serve the residents and employees of northwest Houston,” says Frank X. Speidel, M.B.A., MD, Chief Executive Officer of St. Luke’s Hospital at The Vintage. “We appreciate the team of professionals at Hammes Company who worked diligently and tirelessly to ensure the hospital was developed in a timely manner so that we can begin serving the community. Hammes has helped St. Luke’s to quickly and cost-effectively implement parts of our suburban expansion strategy over the past few years.”

One of the upcoming projects is a new three-story MOB, which is currently being constructed on the St. Luke’s Hospital at The Vintage campus.
The architect for St. Luke’s Hospital at The Vintage was Nashville, Tenn.-based Earl Swensson Associates, Inc. (ESa) and the general contractor was Tellepsen Builders LP of Houston. In addition to the external team members, Stewart Scott, who leads St. Luke’s Capital Projects group, contributed heavily to the success of the development.

Since 2000, Hammes Company has served as St. Luke’s Episcopal Health System’s development partner for:
■   St. Luke’s The Woodlands Hospital, 17200 St. Luke’s Way, The Woodlands, Texas. This facility opened in 2003 as an 84-bed hospital on about 24 acres in a fast-growing master-planned community called The Woodlands, about 35 miles north of Houston. As St. Luke’s development partner, Hammes Company played a crucial role in this important project, which was the faith-based system’s first hospital outside the famed Texas Medical Center in central Houston. St. Luke’s The Woodlands Hospital was also designed as a “high touch” environment, complemented by advanced clinical and information technologies and provides many amenities to promote healing. Subsequently expanded to 62 acres and 150 beds, the hospital provides services in the areas of emergency care; diagnostic imaging; a family birthing center; pediatrics; a comprehensive heart program; and a surgery center offering bariatric, outpatient and robotic surgery; and Gamma Knife technology.
■  St. Luke’s Medical Arts Center (MAC) I, 17198 St. Luke’s Way, The Woodlands. MAC I is a six-story, 100,000 square foot medical office building (MOB) that is physically connected to St. Luke’s The Woodlands Hospital. Completed in 2003, it is anchored by the MD Anderson Regional Care Center, which offers chemotherapy, radiation, laboratory and pharmacy services.
■  St. Luke’s MAC II, 17350 St. Luke’s Way, The Woodlands (which has since been sold by St. Luke’s). Located adjacent to the hospital, this four-story, 100,000 square foot MOB was completed in 2005. It features a masonry clad design with steel frame construction, concrete floor decks and two elevators. Tenants include the multi-specialty Kelsey-Seybold Clinic and several independent physician practices.
■  St. Luke’s Lakeside Hospital, 17400 St. Luke’s Way, The Woodlands. Like St. Luke’s Hospital at The Vintage, this 30-bed, 77,830 square foot facility was completed on a fast-track schedule. St. Luke’s Lakeside Hospital was completed in August 2009, just 10 months after the start of construction. The hospital, located at the south end of The Woodlands campus, specializes in sports medicine, cardiology, orthopedic and spine care. It includes a freestanding emergency department and an advanced diagnostic imaging department.

“St. Luke’s Episcopal Health System is known for delivering world-class medical expertise and compassionate care,” says Hammes Company Founder and Managing Partner Jon Hammes. “It has been a pleasure to work with St. Luke’s in the past, and we look forward to working with them on current and future projects for many years to come.”

About Hammes Company
Hammes Company is a single source of market-based and financially sound healthcare solutions. The full-service consulting firm is at the forefront of providing strategic planning, facility development, project management and implementation, and real estate acquisition and advisory services to hospitals, healthcare systems, and major physician groups. The company has been ranked as one of the nation’s top developers of healthcare facilities for 11 consecutive years by Modern Healthcare magazine. Hammes Company is headquartered in Brookfield, Wis. and provides services through a network of regional offices strategically located across the country. For more information, please visit www.hammesco.com.